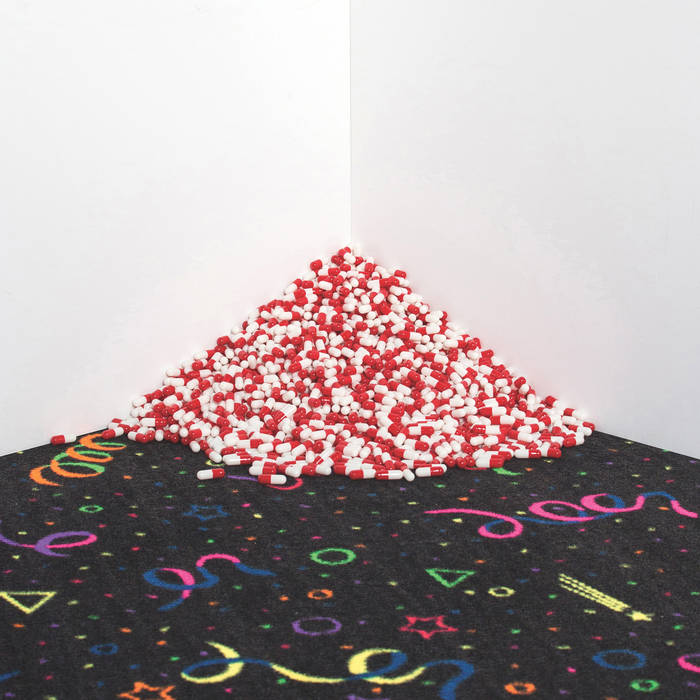 Art Fin Interesting post-punk with sax that is rooted in but more accessible than their late-1970s "no wave" predecessors. It reminds me more of 80s catchy new wave acts with sax like Romeo Void, Essential Logic and X-Ray Spex rather than semi-atonal no wave acts like the Contortions and Mars. it's also influenced by non-sax bands like Delta 5 and Bush Tetras. Video: www.youtube.com/watch?v=5EEI1rXPHtw

“...reality, however utopian, is something from which people feel the need of taking pretty frequent holidays...” — Aldous Huxley

Pill is Veronica Torres, Andrew Spaulding, Benjamin Jaffe, and Jonathan Campolo. Pill found each other in Brooklyn, NY, colliding in the city's ever-changing DIY community. They exist along the tail of transition that has found new and worrisome traditions of marginalization in NYC.

Convenience is Pill’s debut album. It follows an EP and single, exploding the concepts advanced on those recordings through a field of emotional and political upheaval, where something that makes life easier for one group of people might make life harder for another. It’s this very skepticism of modern comfort that drives the music Pill makes; an unsettled sound that dichotomizes a tension-release dynamic that feeds upon itself.

The interplay between these four musicians is borne not only of a restless spirit of musical inventiveness, but what guitarist Jonathan Campolo describes as “a completely democratic process.” Andrew and Veronica had written songs together before meeting up with Jonathan, still missing some final momentum to the force. Not long after, Andrew mentioned “this wild guy who was running around Bushwick with a saxophone.” This was Benjamin Jaffe, a musical accomplice who’s been playing professionally since the 90’s. With this, four musical conspirators make equal contributions to their sound, based on concepts Veronica denotes as “physicality, catharsis, and psychic release.”

Convenience skids like a garbage truck with no brakes, barreling through passages of guitar chording bent at the wrong angles and ring-modded riffs aligning with Ben’s expressive sax before splitting apart into chaos. Veronica assumes double-duty between vocals and bass, while Jonathan plays three instruments in the live setting and Andrew four, including circuit-bent noise rigs of their own invention. Veronica’s words are delivered with the speed and frenzy of someone with their life on the line, but she’s also able to slow things down in a gesture of dominance, confidence, and trust. This band is wise enough to know that safety is fleeting, so they take their digs when and where they can.

Given Pill's backgrounds, their music advances a notion of what the punk spirit of NYC might be: the capture and distillation of the energy and friction that comes from living amongst so many people in such a confined space. The idea seeds in free jazz and improvisation; reached adolescence in galleries and loft spaces in the ‘70s; found politics in squats and independent spaces; and it grows stronger the more these several sensibilities are practiced ands stewed. Call them No wave, post-punk, noise; they are immune, content to head off in a direction of their own design.

Politics are important to Pill. Veronica identifies as a feminist, but declines any specific agenda other than “awareness of our own bodies and the space around us, and being cautious of what is projected onto us.” Her lyrics tackle themes of harassment (“Speaking Up”), government impedance (“My Rights”), and gender intersection (“Fetish Queen,” “Dead Boys”). She warns about pigeonholing her approach, or the words she sings: “Me and every other woman I know who screams in a band gets the same references,” so kindly don’t bother.

Today, communication slides down the scissor of anonymity and accountability. Needs are instantly answered, sublimated, and replaced by other needs. Pill are pawns in a city which amplifies the societal curses of the day, as well as its denizens’ responses to them. Pill’s music is one such response, a pulsing protest of anguish and desire clotted with arrhythmia and dissonance. A howl of freedom that is conscious of the cost of that freedom. This is a time and a place in which convenience is delivered and returned for store credit. This is a time for Pill.

Bandcamp Daily  your guide to the world of Bandcamp